Pokémon counterparts are specially colorated versions of Pokémon that are adventitiously encountered in the wild and—more conservatively so—obtained from Pokémon-giving NPCs.

Compared to other Pokémon MMOs, Pokémon Revolution Online is not multitudinously diversified in the array of special counterparts available; aside from the traditional shiny counterparts, special counterparts are more commonly obtainable as temporary event-thematic Pokémon than any regularly encounterable counterpart of wild Pokémon. Moreover, they do not bear any inherent statistical enhancements; they merely have an aesthetic distinction from their regular counterparts.

Shiny Pokémon are also the only special counterpart that each Pokémon has a version of; event-temporary ones are tailored to a specific assortment of Pokémon, as outlined below. 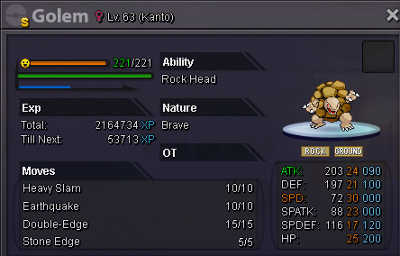 In addition to their distinctive coloration, shiny Pokémon are also identifiable by the golden S emblem; see the image to the right for a pictorial illustration.

When hotlinked in the chat, their link is purple-colored to differentiate it from their regular counterparts; for example, a shiny Pikachu would appear as <Pikachu> when hotlinked.

Any wild-Pokémon battle initiated by an NPC script will not have a shiny chance; this includes even catchable Pokémon encountered via Headbutt Trees, Diggable Patches, Excavation Sites, and overworld-interactable Pokémon (such as the occlusive Snorlax on Route 12).

While the wild-battle-initiator used by NPC scripts has no shininess chance, Pokémon that are directly given by NPCs can still have chances if the RNGs are configured within the scripts for it; examples include fossilized Pokémon regenerated by the fossil-reanimators, some boss-prize Pokémon, and abandoned Pokémon.

Because these Pokémon are given much more infrequently than wild Pokémon are encountered, they tend to have varyingly lower shiny-chance odds than the standard 1/8192 rate of wild Pokémon.

With the advent of Pinkan Island—one of the Orange Islands that was released as a standalone content addition—a bevy of Pokémon were pinkified new counterparts as a nod to those who inhabited the aforementioned area in the anime.

Every Pokémon inhabitant on the island and evolutions thereof has a pink counterpart; there is a 1/1,500 chance of encountering them in the wild. All of such inhabitants are assorted in the collage below, among a few others that have not yet been made huntable.

Occasionally, specially themed counterparts have been made available for Pokémon to help saturate event-exclusive Pokémon—typically for a select assortment of Pokémon that tally to the nature of the event. While they have never been made encounterable outside of the event, all Pokémon obtained during them were retainable by the players and thus those that remained in circulation were considered collectible commodities among traders.

Do note that these versions have no shiny-counterpart versions; shininess is a discrete chance from these versions in the RNG calculations and thus they are mutually exclusive.

For the 2016 Christmas Event, specially accessorized and/or colorated Pokémon versions were released for a select bevy of Pokémon. There is a 1/750 chance of encountering these counterparts in the wild. In addition to the gamut of previous-year counterparts, a new batch of them was added to the spriteset for the 2017 Christmas Event.

All of the these Pokémon and their Christmas-themed sprites are shown in the alphabetized collage below.

During Christmas 2018, a total of 9 Pokémon families were given a Christmas counterpart while certain other Pokémon were not made available as Christmas Pokémon again. The chances to find one was 1/1000. Additionally Christmas themed Manaphy was a reward from the main quest that year.

During Christmas 2019, a total of 7 Pokémon families were given a Christmas counterpart and 5 Pokémon family sprites were reworked the following being (Riolu + Evo, Munchlax + Evo, Buneary + Evo, Snover + Evo and Teddiursa + Evo). The Christmas form chance was 1/750. Additionally a Christmas themed version of Kyurem was obtainable by completing the main quest that year.

During Christmas 2020, 2 new Pokémon families were given a Christmas counterpart Ferroseed + Evo and Numel + Evo. The Christmas form chance was not revealed.

On October 18th, 2017, Halloween-themed counterparts of Pikachu and Raichu were ushered in for the contemporaneous Halloween event, randomized at a 1/20 (5%) rate of huntability.

During 2018's Halloween, all three Kanto starters were also given an Halloween counterpart.

On October 22nd, 2019 New Halloween sprites were released mainly focusing on the Kalos starters, aswell as a few other Pokémon. Additionally we were able to catch previous Halloween themed counterparts. The rate to catch the forms this year were 1/50 (0.02%). 2 Darkrai forms were also released this Pokémon was again obtainable for the Halloween Event 2019. However those who have previously caught Darkrai from 2017 were additionally given the choice for the Pumpkin Form.

More Halloween-themed Pokémon were released again in 2020, mainly focusing on the Johto starters. Additionally forms from previous years could be hunted again.

In August of 2016, starter-clone counterparts were introduced for each Pokémon in the evolutionary line of Bulbasaur, Charmander, and Squirtle as an anniversary-commemoratory event—approximately one year removed from its release into the Beta stage on August 14, 2016. While the event was abruptly discontinued later that month due to various technical difficulties, it was reintroduced on November 14, 2016, as a consolatory event due to the Halloween event's cancellation that year.

Clone Pokémon are colorated in accordance to those that were created and deployed in the Pokémon: The First Movie - Mewtwo Strikes Back.

There is a 1/20 (5%) chance of encountering these counterparts of wild starter Pokémon. Do note that this is not applicable to starter Pokémon given to regional newcomers in the lab; they have no special-counterpart chances altogether.

For the 2018 Valentine's Day Event, specially accessorized and/or colorated Pokémon version were released for Nidoran Male and Nidoran Female, Illumise and Volbeat. There is a 1/550 chance of encountering these counterparts in the wild.

For the 2020 Valentine's Day Event, specially accessorized and/or colorated Pokémon version were released for Cleffa, Clefairy and Clefable and the rerurn of the other Valentines Day sprites from previous years. The chance of encountering these counterparts in the wild has yet to be revealed.

For the 2021 Valentine's Day Event, specially accessorized and/or colorated Pokémon version's were released for 25 different Pokémon and the rerurn of the other Valentines Day sprites from previous years were also huntable. The chance of encountering these counterparts in the wild are not revealed.

For the 2018 Easter Event, specially accessorized and/or colorated forms of Togepi, Togetic and Togekiss were pioneered. There is a 1/550 chance of encountering these counterparts in the wild.

For the 2019 Easter Event, specially accessorized and/or colorated Pokémon versions were released for Exeggcute, Kangaskhan, Azurill, Feebas, Munchlax, Larvesta and their evolutions. There is a 1/550 chance of encountering these counterparts in the wild, as well as the Togepi Easter forms released in 2018. (Pinkan Island excluded)

For the Easter event 2020, Happiny, Bunnelby and their evolutions were given specially accessorized and/or colorized forms. There is a 1/550 chance of encountering these counterparts in the wild. Additionally, any Pokémon which had an Easter form in previous years were also available to hunt. Furthermore, Shaymin and it's Sky form were given event forms. This was obtainable via completing the Easter Quest that year.

For the 2021 Easter event, Bellsprout, Wooper, Mantyke, and their evolutions were given specially accessorized and/or colorized forms. Additionally, Diancie received several Easter forms. Any Pokémon which had an Easter form in previous years were also made available to hunt.

May 4th 2021 saw the addition of Machop, Machoke, and Machamp weilding their own lightsabers, with Machamp resembling General Grievous. Meditite and Medicham, along with its mega, also saw their own sprite added, looking like Yoda. The last family added was Grimer and Muk, who look like Jabba the Hutt. These forms were released for a limited time.

During 2020's summer event, specially accessorized and/or colorated Pokémon version were released for the Gen 5 Starters along with a few other Pokémon. The chance for these Pokémon are not revealed. Additionally a summer form for Volcanion was released and obtainable by completing the quest that year.

During 2021's summer event, specially accessorized and/or colorated Pokémon version were released for 2 Pokémon families being Squirtle's and Darumaka's. Along with these counterparts, summer themed versions were released for Latios and Latias as a reward for having completed the Summer 2021 Quest in Alto Mare. The chances for these Pokémon are not revealed.

During 2020's Christmas event, 2 World Quest's were held which required the user to hunt Pikachu. During this sub-event Pikachu received 12 new huntable forms.