Fuchsia City is a town situated in central-southern Kanto. It is a tripoint between Route 15, Route 19, and Route 16.

Fuchsia Gym is tenanted here, which rewards the Soul Badge to victorious trainers—the fifth badge in Kanto's successional line of gyms. This badge grants access to Saffron City for the sixth badge once you dispense Lemonade to any of the four gatehouse guards.

Next to Fuchsia Gym, its most saliently notable intrasite is Kanto Safari Zone—a regulatorily controlled preservoir that harbors many limitedly huntable Pokémon for its visitors to capture.

Kanto's Safari Zone is tenanted in Fuchsia City. Admissibility to it requires defeating Victor on Route 19; thereafter, you can enter it for a fee of

5,000 for a 20-minute session or purchase a daily pass, which allows you to freely enter any Safari Zone for 24 hours, for a fee of

10,000 option to gain a 20-minute access into the Effort Wald—an area specialized for EV training.

HM03 (Surf) in Safari House 4 (on Safari Area 3); once this has been acquired, water will be traversable by usage of surfable mounts and/or Surf-wielding Pokémon.

The Effort Wald area is an area carefully designed to amplify the speed and efficiency to which a player can EV train. It is divided into two main maps, each with 3 specific patches of grass that each spawn certain Pokémon for a certain stat.

This NPC will sell you TMs from Generation I, this means only Category:Generation I Pokémon are able to use these TMs.

Similar to other Kanto cities and towns, there is an Officer Jenny here that gives out small quests, often dubbed "bounties". She is directly to the right of the Pokémart and she will give the following bounties:

The Fishing Guru can be found residing in Fuchsia House 1 (the house nearby the enfenced pond). He will sell you a Good Rod for

15,000, contingent that you already have the lower-tier Old Rod on-hand, enabling you to hunt for more exclusively fishable Pokémon.

A NPC trader can be found in Fuchsia City's Pokémart; he will trade his Mime Jr. in exchange for a Mr. Mime from you. The Mime Jr. will be level 20. 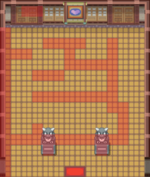 All the red-highlighted areas are impassable, marking the invisible barriers.

Upon defeating Janine, you will procure the Soul Badge, which is a prerequisite for advancing to Saffron City in order to acquire the next badge in the successional line in the Marsh Badge. Thereupon, Toxic will be sold by the Gym Guide at

20,000 for five. However the first time you purchase the TM, it will be sold at half the true value, lowering it to

In order to reach Janine, you will need to navigate your way through an invisible maze, battling a gauntlet of Janine impostors. The barriers that you need to pass through are invisible; see the pictorial guide to the right to know the pathway you need to tread through.

While common sense dictates to preparatively strategize against the Poison-type weaknesses, it is worth noting that part of her lineup is comprised of Bug-type Pokémon, too; as such, it is advisable to consider deploying Fire-, and Psychic-type Pokémon and moves against it. Ground-type Pokémon and moves should be disconsidered, since most of her Pokémon are immune to it due to Flying-typing and the Levitate ability.

After defeating the Kanto League, Janine will be rechallengeable and will reward you with some items.