During the Christmas event, the following Pokémon as well as their evolutions have a 1/750 chance of appearing in their Christmas counterpart, regardless of where they are met (Pinkan Island is excluded). 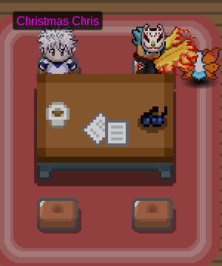 At the start of Evergreen Island Village in the hideout opposite the Evergreen Island Shore , there is a stationary daily-challengeable Boss named Christmas Chris. His team will always be random, his Pokémon will start of from early 70's and progressively get more difficult each day. The cooldown for this boss is a "server based cooldown" and resets everyday at Midnight (GMT + 0).

If a player is lucky on the day, Christmas Chris will tell the player they have found a Delibird. This will be advantageous to the player because in Chris' random lineup, Delibird will start of giving the player a good set up opportunity, as well as the player being rewarded an additional 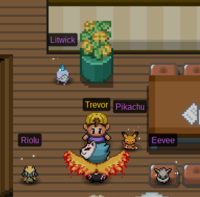 In Evergreen Island Village House 6, there is an NPC named Trevor. Upon interacting with him, he will ask the player if they want to play a game of Hide & Seek. The player must find his 4 shiny Pokémon, being Eevee, Litwick, Pikachu and Riolu which are all located in the maps of Evergreen Island, they will be given 12 hours to complete this. Upon interaction again the player is given clues; 1 for each Pokémon, any more clues requested for a specific Pokémon will charge 3 Christmas Tokens for each additional clue.

The player will be given 5 tokens for each Pokémon they find resulting in 20 tokens overall.

Disclaimer- There is a 12 hour cooldown, this will begin to count from when you first accepted his challenge. You can always speak to Trevor again to see how long the cooldown is.

This is one of the three ways of getting Christmas tokens, while the other two are via Christmas Chris boss and Trevor's Hide & Seek game. This task requires the player to battle and defeat 10 trainers in sequence. The trainers teams will be randomised, using the Pokémon listed below. Succeeding in defeating any amount of trainers, the player will be awarded one Christmas token for each win they get, additionally if they beat all 10 trainers the player gets rewarded five extra Christmas Tokens at the end. This can be used at the shops in Evergreen Island Village to buy several goods. Disclaimer the Battle Underground can be challenged 3 times a day.