Mossdeep City is a Hoenn city which intersects Route 124, Route 125 and Route 127. Furthermore, it is also the location where it is possible to return to the Moon after completing the Hoenn Elite Four, although for a fee.

After completing the local gym and related story, unless the goal is to reach the Moon again, the city does not offer any reason to return to Mossdeep City.

The Space Center is the very large building in the east of the city. Initially, it will be blocked by a Police Officer, and it will be possible to enter after both talking to Steven in front of the Pokémon Center and obtaining the local badge.

Another Police officer will also be blocking access to the second floor. He will only leave after defeating the Hoenn Elite Four and talking again to Professor Birch back in Littleroot Town.

Steven back at the Pokémon Center said he will be waiting at the Space Center after he or she has obtained the local badge. After speaking again to him, he will give the player HM06 (Dive), which will be needed to access the next few locations. Dive requires 150 Happiness to use, so it may be necessary to farm a bit to increase the happiness of a water Pokémon.

He will then instruct to head to Route 128 Underwater. In there is Seafloor Cavern, a cave where Kyogre will be. Before going there, it is to note that on top of Surf and Dive, Rock Smash will also be necessary to reach its end. Furthermore, the Seafloor Cavern cannot be accessed by diving directly in Route 128, it is necessary to dive in Route 127 first.

One of the special NPCs in Space Center 1F is the Caught Date Checker. He will determine the exact time a Pokémon as been caught at.

One of the locations the sixth friend of Rachel can be found in is in Mossdeep City Space Center, sitting in the south-east corner of the first floor. She will trade the player's Potion for a Pokeball.

The next friend to find will be Basuki, who can be found near the end of the region, either at Victory Road Hoenn or Pokemon League Hoenn.

A Move Tutor for the move Trick Room can be found on the first floor of the Space Center. He will teach the move to any compatible Pokemon for the price of

The only important NPC on the second floor is the Gentleman. He will allow the player to return to the Moon for the price of

15,000. He will explain that after moving there, an Elgyem will heal the player's Pokémons up to 4 times. Unlike Safari Zones, there is no time limit, thus the player can remain there as long as his or her Pokémons remain healthy.

In the house directly west of the Pokemon Center is the Pokeblock Enthusiast. He will evaluate the chosen Pokémon based on its happiness. Only the last line of his evaluation will vary:

This is used to know if a Pokémon has enough happiness to use certain moves outside of battle, particularly Dive which is required immediately after defeating the local gym. However, the general way to know about a Pokémon's happiness is to use the /happy command in the chatbox, which actually tells the exact amount of happiness a Pokemon has, on top of being usable at any time. 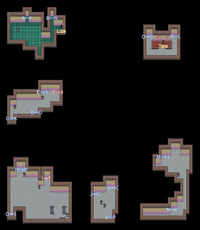 Mossdeep Gym with indications on where each portal leads to

The Mossdeep gym reuses the same Warp puzzle as the Team Aqua Hideout that has been completed immediately before. For the first time, there are now two Gym Leaders, both of which must be fought in any order.

On the Walkthrough map, each Warp is given the following information:

Following that Walkthrough map, the recommended path is the following from the entrance:

Upon defeating both Tate and Liza, the gym-greeter will start selling TM54 (Calm Mind) for the price of

Liza is one of the two gym leaders, both being Psychic type specialists. Liza will be focusing more on the Special side, with Gardevoir and Alakazam being two well known Pokémons with huge special attacks. At the same time, they're also known for their frailty on the Physical side, so a fast physical attacker, or one that knows Sucker Punch will do great. It is also worth noting that she does not do very well against other Psychic Pokémons, as such bringing one that knows a Dark or Ghost move such as Shadow Ball and Dark Pulse is another good strategy.

Tate is one of the two gym leaders, both being Psychic type specialists. Tate will be focusing more on the Physical side, with Gallade and Metagross being two of the few Psychic types with huge physical attack. These later two specially have a moveset that is not unresisted by any Pokemon, and as such, may cause problems. Physical walls will certainly be helpful, especially if they are of the Bug or Ghost types. Although Gallade has a Dark type move for Ghost Pokémons, its low power makes it weaker than a normal effective STAB attack. Otherwise, the best bet would be to set-up against the weaker Lunatone.