A screenful of users and channels of PRO's Discord-server.

Discord is the chatting-software medium used to host the official out-of-game chat in Pokémon Revolution Online's network of services. It supplanted the IRC chat for the mantle of PRO's official external chat on April 23, 2017.

By concomitance of its officiality, it is the most populous out-of-game chat available for PRO at this time, allowing you to communicate with staff members and fellow community members on a real-time basis.

As the most prominently interlinked out-of-game chatting hub used by PRO, it is accepted as PRO's official out-of-game chat; as such, it is used as the go-to player-support real-time chat outside of the game, as well as a popular hub for conversing with the rest of the community.

Its rules are codified similarly and thus the same guidelines and rulings should be expected here as you would expect from any other medium in PRO's network of services. The chat-specific rules will be delineated below, but do take as a rule of thumb that the rules model themselves after the same regulatory goals pursued by PRO's network of services; that means that you should not do any action that would be rule-breaking as it pertains to the game in this chat (scamming, for example).

As its an official part of PRO's network of services, do bear in mind that extremities of abuse herein could warrant actionable punishment for your in-game account if deemed necessary.

To join most seamlessly, you can click on the Discord widget below. 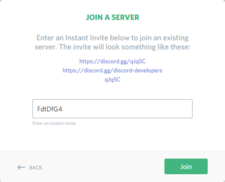 Alternatively, you can join the Discord-server by inputting the invitational link's ID hereon.

As a bimodal software, it is usable both via the website or its downloadable application-based software. If you have not already registered a Discord account, it is advisable to do so, beforehand, for identificatory privileges and global retention of all your servers and configurations; however, doing so, while beneficial, is not categorically required to join PRO's official server.

Thereupon joining, it is advisable to read the ruleset (#server-rules, which is your initialized tab) before chatting.

Additionally, you are enjoined to classify yourself based on the server; this will colorize your name in accordance to the designated server, accentuating what in-game server you primarily play on. To assign yourself to a server, use the ?rank server-name Server command.

Do note that until you reach the level-7 threshold, accruable through the mee6 bot, certain privileges, such as hotlinking images, will be inaccessible. Experience points are granted by mee6 through posting messages, and your level-ups will be announced.

There are currently 15 public textual channels and five voice-chat channels total, which are sectionalized as follows: Rules and Information, Events and Tournaments, Player zone , Trade, and Voice Chats.

This subsumes all channels used to envelop information users are strongly advised to read, which contains #announcements, #server-rules, #pro-useful-links, #frequently-asked-questions, and #guilds.

These channels can only be posted in by staff members and the Discord Staff; as its namesake suggests, it exists strictly for readable information, and only information-posting is conveyed in there for the sake of chat-log mutability.

This subsection, consists of only one active channel, contemporaneously- #Player-Hosted-Events; which is used as a medium to advertise unofficial tournaments and events hosted by players. Advertisement of one's event or tournament in the said channel can be done by contacting a Discord Moderator or Discord Leader. This channel is non-usable by non-staff members. ('Non-staff members' excludes the Discord staff)

All conversational activity is conducted in Player Zone's nodal section of channels, containing the server's central channel in #general.

While most chatting is done in #general, other channels exist to focalize more specific chat usages: #support, which is optimal to post in for eliciting support from staff and players, in addition to general informational needs; #pvp-showdown, for match-making PvP battles and for general advice and discussions within its purview; #bot-commands, which is where all commands (read the parental section below) should be performed; and #video-streams, where video streams and channels—typically gaming-oriented ones—can be acceptably advertised.

All advertisements pertinent to trading and other commercial activity is restricted to these channels. It is compartmentalized into two server-respective channels, total. An additional channelization #daycare_shops, can be viewed in the "Trades" subsection. It servers the purpose of advertising daycare shops of players. This channel is also locked; only the staff members can post here. Requesting the Discord moderators, Discord leaders, to make an advertisement about one's shop should be done if players desire to advertise their daycare shops in said channel.

All rules within the purview of trading are to be conducted, here, when brokering for trades.

In addition to textually chatting, voice-chatting is also conductible; all channels for it are subsumed under this section. They will be accessibilized as soon as you attain level 7 on the Mee6 Discord not.

With an assortment of bots plugged into the server, various commands have been enabled for both the staff and server members to use to perform moderatorial, managerial, and informatory functions.

The syntactic prefixes and command scopes will vary depending on the bot, which are sectionally explained below.

All commands are to be strictly performed within the #bot-commands channel.

FredBoat is tailored strictly towards the #voice-chat channel, broadcasting songs within earshot of its voice-chat participants.

Discord's staff team fields all the administrative and moderatorial personnel of the chat, as they manage and arbitrate the chat.

All in-game staff inherit managerial and moderatorial privileges for the chat, and a specialized staff team fields non-staff members who serve as moderators for the chat.

The applications for Discord Moderator are always open, but they are regularly and ultimately hand-picked by the Discord Leaders, who vet for moderators out of users they feel are dedicated, well-behaved, and helpful enough within the community to serve effectually within the role.

An array other roles besides the managerial and moderational ones exist. They are detailed below.

Level-up roles are attainably by posting in the chat, which randomly yield 15-25 XP per post. To curtail spamming, experience is only granted once per minute to the user. As you level up, you will earn a new role, often in addition to different nickname coloration and new privileges.

To examine your current level, post !rank in the #bot-commands channel.

Players who contribute to the game in one or the other way in a stable and consequential procedure. In simple terms, they are active players who contribute via different methods, such as;assisting on General Support in the forums, creating useful guides on forums and so forth.

This role refers to the individual who contributed to the game as a staff heretofore, and aren't a member the team, contemporaneously.

This role has been designed for the reprobate who antagonistic to the ruleset. The individual with this role would not be able to post in any of the channels in the server for a set duration.

This is role given to the contemporaneous staff members of the game. Please visit Staff for more information on this topic.

These are the server-related roles, this role can also notify a player when a World Quest is active. One can assign himself one of these roles by typing the following command in #bot-commands; ?rank <server's name> server

These are the server-related roles, which allows the user to get notified when there is a Outbreak active. One can assign himself one of these roles by typing the following command in #bot-commands; ?rank <server's name> Outbreak

They preside over the game's spawns, maintaining the health and integrity of the spawns.