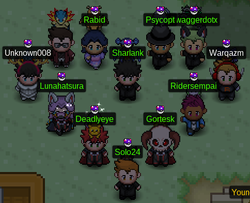 A lineup of guild members convening for a guild-groupie picture, displaying their guild's logo above their avatars.

Guilds are syndicated fellowships of players that are player-created and -managed. They are Pokémon Revolution Online's factional equivalents of other similar syndicates in other MMOs, such as clans.

Membership of a guild will register you in a group of players; this inherits various socializational amenities, such as the in-game Guild channel. While the tangible gameplay features of guilds are currently minimal, it is generally accepted that they are conducive for rapport-building with those in the same guild, and all guild members will be beneficiaries of experience-gain bonuses depending on the guild-member threshold that is attained.

For a more comprehensive list of guild-operational commands, refer to here.

There is no systematic application that is required to join a guild; rather, you simply need to solicit an invitation from the appropriate contactees. Guild Masters and Officers are the only ones with invitational privileges, meaning that they will need to invite you in-game in order for you to join. Once you have been invited, use the /gjoin command to accept your entrance into it.

To vet for a guild and ultimately contact the appropriate ranks to join one, it is recommendable to browse through the Guilds section of the forums; therein, you can sift through the guilds that are actively recruiting, overview their guild requirements, and contact them to express your interest in joining. 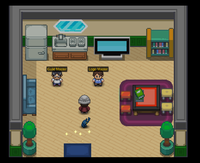 Saffron City's guild house, which is where aspirant guild-creators can inquire about creating a guild and manage their guild's logo.

Since guild-creators and -leaders are expected to be communally adroit and reasonably game-dedicated, a fair breadth of experience is expected; as such, some relatively lofty requirements are imposed, as outlined below:

Contingent that you satisfy all these requirements, you can use the /gcreate guild-name command to operationalize your new guild.

The drawing board for creating and modifying one's guild logo.

Every guild can be emblematized with their own logo, which will hover over its members' avatars on the overworld.

The logo-depictor, which is only operable to Guild Masters, is accessible in Saffron City's guild house. The logo is drawn on a 16x16 frame.

The managerial interface of guilds.

The hierarchical system currently comprises of the following-four ranks.

Guild Masters are the inherent founders of the guild and are on the uppermost echelon of the hierarchy, as they are the ones who have created the guild.

They can invite new guild recruits, expel all guild members, and promote any guild member up to the Officer rank.

This is the subordinate managerial position; it is also the only one with administrative powers outside of the Guild Master.

They can invite new members and they can expel and demote all guild members outside of the Guild Master/Officer rank.

It is the middle-heavy rank of the guild, as this is the rank of all full-fledged guild members. They have no administrative powers; they are simply the standard rank for anyone who has deemedly passed the probationary Initiate rank.

As the typically probationary rank of the guild, this is the initial rank for any guild member. More gradualistic and meritocratic guild-managers will typically wait for the Initiate to prove that they have acculturated and fit in well with the guild before promoting them to the full-fledged Member rank.

Guild Masters and Officers can invite any new member into the guild using the /ginvite invitee's name command; this must be done while both the inviter and invitee are online simultaneously. The entrant will start off as an Initiate by default.

Currently, up to 100 members can be registered in any singular guild.

Using the /gpromote username and /gdemote username commands, Guild Masters and Officers can promote and demote anyone to the ranks mentioned above.

Using the command will promote or demote them from one tier in relation to their current rank; for example, if a Guild Master or Officer were to use the /gpromote command on a Member, it would automatically promote them to an Officer; contrariwise, /gdemote would downgrade them to an Initiate.

Guild Masters and Officers can expel any guild member; the expulsory command to do so is /gkick username.

To disband a guild, the Guild Master must use the /gdisband command. Please note that there is no confirmatory prompt for this command's usage; it will instantly delete the guild upon usage, and it will be irrecoverable, so be circumspect about using this command.

All guild members will avail from experience-gain bonuses depending on the scale of membership that there is in.

The Guild Ladder tabulates all guild-rankings based on the PvP Point accruals of each member; the more summative PvP Points that the guild collectively has in comparison to others, the higher the ranking is.

These rankings are periodized per PvP season, and the results are announced at the end of each season. Members of one of the top-ranked guilds will also reap a 25% experience-gain bonus.