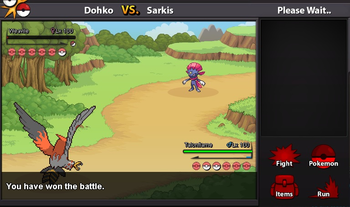 PvP, phrasally known as player-versus-player, is an interactivity between players wherein both participants' Pokémon lineups are deployed against each other in a head-to-head battle.

This is the principal mode of competition among players in Pokémon Revolution Online at this time; as such, it has commonly become the basis for officially hosted competitional events wherein players jostle against each other in PvP battles for potentially enviable rewards, and it has generally become a popular end-game activity for those who have already completed the compulsory content of the game.

For winning ranked battles during active PvP seasons, one may potentially accrue PvP Coins—a currency that is exclusively procured from ranked-PvP battles that can be used in exchange for a multitude of coveted prizes.

In contrast to NPC- and wild-Pokémon battles, there are no experience-points or monetary payouts for battling against other players, nor are there any Pokémoney penalizations for losing. The only consequences that are producible from a PvP battle are an impact on a player's PvP record; and for ranked battles, it can impact one's PvP-rating and possibly warrant punitive consequences depending on whether or not the participant's conduct has breached the ranked-PvP rules.

While this activity is in no way compulsory for completing the game's storyline content and progressional thresholds, it is considered greatly rewardful (particularly in ranked matches) for those who become adroit at it. Additionally, it can occasionally be facilitative for collectors who are looking to cull more seen-data entries in their Pokédex, since encounters with Pokémon therein will register such Pokédex-data entries if they were previously inexistent.

PvP is bimodally categorized into ranked and non-ranked matches; the former impacts a player's PvP-rating and is subjected to regulatory rules and restrictions in usage of moves and abilities, whereas the latter is autonomous but is tangibly rewardless in comparison.

While non-ranked battles are rewardless in the sense of no PvP Coin payouts and the lack of rewardful distinctions, they are not subjected to the official constitution of ranked-PvP rules.

To initiate a non-ranked battle, you must directly request a battle from another player; you can do so via the /battle username command or by right-clicking on their name (if within eyeshot of the overworld or chat) and select the 'Battle' option. If the sendee accepts, the battle will be initiated.

An outline of this player's then-record for non-ranked battles, which is also overheaded by their ranked-battle rating.

Outcomes of non-ranked battles will be impactless on a player's ranked rating; however, the outcomes are still accumulatively registered and logged accordingly.

Non-ranked records are also tabulated on the Dashboard; however, they exist strictly for informational and recognitional purposes, and they reap no rewards, otherwise. 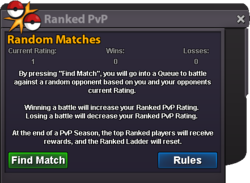 Converse to non-ranked battles, these are not directly initiable; rather, they are coordinated through a systematized match-maker.

The match-maker slots all aspirant battlers in a queue, and it searches for others until it finds one whose PvP record tallies well enough to them. If no waitee with a commensurate PvP record can be found, the match-maker will eventually coordinate a battle with whoever has the smallest PvP-rating differential.

In order to join this queue, one must presentially be within a Pokémon Center and must have a team with all-six-100-level Pokémon.

PvP Points are an accrual attained through ranked-PvP matches that are used as a touchstone for their official ranking on the Dashboard. In addition to the PvP Ladder, these are also checkable via the /inspect username command on one's player card.

The payout of PvP Points is calculated depending on the PvP Points differential between the opponents; if they are within the same bracket, 16 points will be rewarded to both participants; with greater differentials, however, PvP Points will be apportioned discrepantly wherein the player with a lower PvP Points-rating will win the preponderance of them.

PvP Point accruals are also periodized into PvP seasons—indeterminate-length seasons wherein the amount of PvP points gained are calculated only within that PvP-season period. At the end of these seasons, results are announced, and rewards—which vary each season—are doled out to the uppermost-ranked PvPers of the season. The collective PvP Point accruals of guild members are also calculated during this season for each guild, and they are tabulated on the Guild Ladder.

PvP Coins are the official currency of the PvP Coin Masters, and they are strictly earnable through ranked battles, providing niche rewards for the more successful PvPers.

One PvP Coin is gained per ranked win; additionally, the uppermost-ranked players in a PvP season are variably rewarded an amount of Coins, which effectuates at the season's official conclusion.

This currency can be redeemed to the PvP Coin Masters in Vermilion City, Olivine City, Mauville City and Canalave City for any one of the affordable prizes. Each PvP Coin Master sells the same gamut of prizes.

Due to this mode's officiality, it falls under the regulatory purview of staff; as such, misconduct and mismoves during battles, as defined by the official PvP ruleset, can warrant punitive consequences, including account bans and potential revocations of any rewards illicitly obtained from it.

Disconnectors will be restricted from rejoining the match-making queue for another 10 minutes as a penalty for doing so, and they will also be penalized with a loss; conversely, the lone-remaining participant will be rewarded with a win and rewarded PvP Coins accordingly.