Individual Values, abbreviationally known as IVs, are the statistical homologue of Pokémon genes. They are genetic variables that factor into a Pokémon's cumulative stats, as they coalesce with Effort Values, base stats, and Natures to determine the upgrowth rate of its stats per level.

IVs are one of the two Pokémon-specific statistical variables, alongside EVs; they are differentiable mainly due to the fact that IVs are statically predetermined, meaning that they are not modifiable, whereas EVs are changeable.

They are considered the most pivotal variable of a Pokémon's stats due to how much adventitious luck is required to notch enviable IVs for all the vital stats of the Pokémon. While Effort Values are changeable and Natures avail from the Synchronize ability to greaten the chance of inheriting a targeted Nature, IVs sheerly depend on luck.

IV values range from 1-31 in PRO, thereby ranging the potential amount of total IVs from 6-186. The probability of having the same IV value, such as the maximal one in 31, for all stats is determined by this probability-multiplication axiom: 1/31^6.

The impact of IVs per stat will not immediately manifest at lower levels; because these stats are all relativized towards the Pokémon's level, IVs will not noticeably factor into the outgrowth of your Pokémon's stats until later levels. The subformula for determining the points produced by IVs is illustrated below:

This extrapolates to 1 stat point per IV by level 100, meaning that up to 31 additive stat points can be added by IVs.

Unakin to many other Pokémon MMOs, special-counterpart iterations of Pokémon, such as shinies, are boostless, meaning that their IVs are randomized and ranged in parity with regular counterparts, too.

IVs are hereditarily static; they are randomized upon capturing the Pokémon and will remain static as the Pokémon levels up.

The only changeability available for it is the Reroll Ticket; this will re-permutate your IVs, randomizing each one again. The device can be purchased from one of the following: 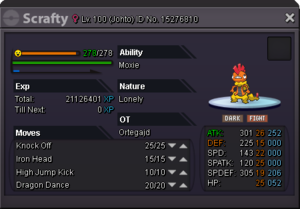 The orange-colored values represent the Pokémon's IV respective to the aligned stat.

While IVs were hidden powers in the official games that had to be deduced through calculation, that is not the case in PRO; they are readily knowable, since the IV values that are stored in the database are transcluded onto the hover-over card of your Pokémon, as shown to the right.

Hotlinking in the chat

A shiny Octillery being shared in the chat by Pokémon-hotlinking.

The most streamlined method of sharing IVs to other players is by hotlinking your Pokémon in the chat; this can be done either by dragging and dropping the Pokémon into your chat bar or by typing in [Poke#] (replacing # with its positional placement in your party). When hotlinked, the Pokémon's name will be printed in the chat enclosed in brackets with pink coloration (eg: <Pokémon-name>), generating a clickable link that will open up semi-private hover-over card of the Pokémon's data.

Determining the essential IVs for your Pokémon

Because of how heavily luck-dependent IVs are, Pokémon with well-rounded IVs are enviable commodities to traders; however, that is subjectified by the fact that the essential stats vary for each Pokémon and sometimes have ambiguous consensuses.

For the putatively essential stats of a Pokémon, suitors will generally want high-end IVs in them (generally ranging from the mid-20s and upwards); the only major caveat in that regard is for the Speed stat, where most will want maximal Speed because of how potentially decisive they may be in winning the first strike in a battle.

A tapestry of factors are appraised to determine the most crucial stats that your Pokémon need IVs for, including the Pokémon's base-stat value for the stat, whether its moveset is predominantly Physical- or Special-powered, the base-speed bracket of other Pokémon (example: maximal Speed is considered more crucial for Pokémon with 80 Speed base-stat points in order to outspeed common match-ups), prevalent PvP match-ups, and so forth. For example, a PvPer who is trading for an Onix will most likely covet Defense IVs because of the Pokémon's tremendous Defense base-stat points, while they will probably dismiss its Special Defense IVs because its base-stat points are relatively paltry and because its Rock- and Ground-dual types make it so insusceptible to Water- and Grass-type attacks that good Special Defense IVs would make a negligible difference.

While IVs principally function as intraneous factors in your Pokémon's total stats, they also are oftentimes stipulated as requirements to access or complete various PvE features, including a smattering of quests. The known IV requirements are tabulated below.