This quest's completion is required in order to access the aforementioned area, allowing players to use the only Orange Islands area that has been released at this juncture. Once it has been completed, pinkened Pokémon will be huntable—a speciological counterpart of Pokémon that are peculiarly pinkish in their pigmentation that inhabit the island. 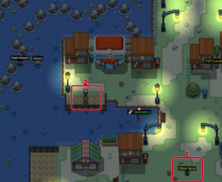 The first-two NPCs you will need to confer with to start the quest before embarking to Pinkan Island.

Once you have become a triregional champion by defeating the Hoenn League, you can speak to Officer Jenny in Vermilion City to start the quest.

She will inform you that Team Rocket agents have just absconded the area; since the nature of their escapade was unknown at that juncture, she will start by eliciting your witness account of it (which is inapplicable at the time) before enlisting your investigatory help for the incident.

Because neither of you were apprised of any rudimentary details of the incident, she will exhort you to speak with the locals for any potentially elicitable information. Speak to the lady near the Pokémon Center (see the thumbnail to the right for the exact locus); she will recall that she saw two figures, likened to Team Rocket agents, headed towards Route 6. 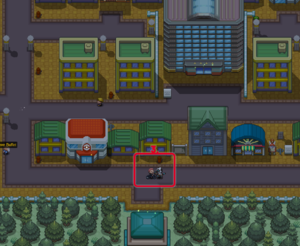 A cyclist who was a bystander witness to Team Rocket's hasty run-through of the area.

Tread northwards and enter Saffron City. You will find a cyclist riding nearby the southern gatehouse; speak to him. 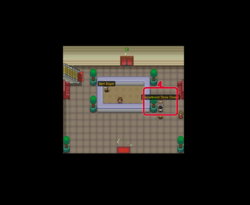 The Celadon Department Store-owner, who is appreciably harrowed by Team Rocket's recent theft of the store.

Once you enter Celadon Department Store, you will speak to the owner on the receptionistic floor, learning that they have just been freshly robbed with no avail from the local police department.

Now that you have yet another lead to pinpoint Team Rocket's whereabouts, head to the contiguous route in Route 7. You will find another infamous Team Rocket duo in Butch and Cassidy; they will challenge you to a Pokémon battle once confronted. 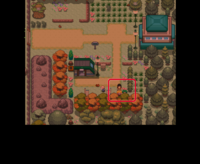 An encounter with Cassidy & Butch on Route 7.

Irrespective of the outcome, the duo will decamp out of the area, disadvising you from following them. Now, it is time to report back to Officer Jenny about that murky encounter.

Upon recapitulating your encounter with the Team Rocket agents and the witness accounts gleaned along the way, Officer Jenny infers that they have conspired to poach pink Pokémon from Pinkan Island.

Having already built a reputable rapport with her, she will sanction you to visit Pinkan Island to help apprehend Team Rocket amid their devious plans. Speak to the Pinkan Island sailor on the dock, who will costlessly ferry to the island for this visit.

As soon as you arrive, another Officer Jenny, will immediately confer with you, having been relayed of your investigatory role in the case; shortly thereafter, another Officer Jenny will report that the pink-Pokémon inhabitancies have reportedly depopulated, indicating that Team Rocket has already made strides in poaching them.

With the increasingly exigent plight reported, it is time to hasten to the forest southwards.

Upon entering the forest, all of your Pokéballs will be confiscated by the ranger; this is to preclude its visitors from capturing pink Pokémon, which is interdicted against any uncitizenized visitors. They can be reclaimed later by interacting with the ranger.

You'll immediately confrontationally encounter a Team Rocket agent, who you will need to beat to proceedingly move through the forest. 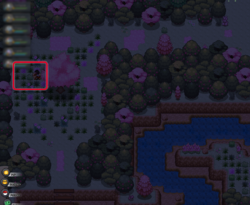 The concealed location of one of the Team Rocket agents (in the bush).

Once you have dispatched him, scour the rest of the area for other Team Rocket agents. They will all flee and conceal themselves once you approach them within proximate eyeshot, entailing that you search to locate wherever they are hiding. 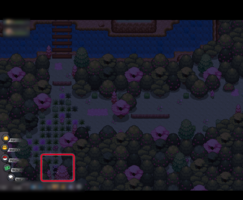 Another Team Rocket agent hiding underneath a tree.

There are three fleeing Team Rocket members, total; each one will battle you upon their detection, as shown below. 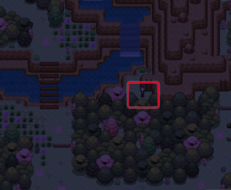 The last agent, found nearby the mountainside.

Once you have dispatched all-three of them, you can enter Pinkan Island Cliff.

On Pinkan Island Cliff, you will find various skirmishes between police officers and Team Rocket agents, as they have all congregated here. Since most pathways are occluded due to their ongoing battles, you must navigate through the area via the bridges.

Various pink Pokémon will be noticeably held hostage; you must defeat the captors in order to liberate them, as shown below.

With them dispatched, one last encounter is waiting with Butch and Cassidy, who can be found amid the fray.

Once you have completed that penultimate battle, it is time to battle a perennial nemesis of yours: Giovanni, who has spearheaded the sordid operation at hand.

Once you have vanquished Giovanni once again, Team Rocket will abscond once again, whereafter Officer Jenny will escort you back to Pinkan City.

You will be resituated nearby the Pinkan City ferry.

If you haven't already, it is advisable to reclaim your Pokéballs from the Pinkan Island Forest ranger. While you still won't initially be allowed to carry your Pokéballs into the area, he will offer you a workaround: if you donate both a level-90-plus Scyther and Electabuzz with maximal happiness, you will be allowed entry in the forest with your Pokéballs, allowing you to hunt for pinkened Pokémon therein. Note that neither the Scyther nor the Electabuzz require your OT.