The Arcanine Mount quest is an optional quest that is progressible within the Kanto region.

Reflective of its namesake, it rewards an Arcanine Mount, making it one of the rare ways of obtaining a Mount outside of purchasing one on the Coin Shop. 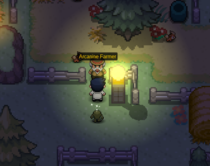 From the Route 19 bay (southwards of Fuchsia City), surf eastwards and meander your way around the mountainside; this will lead you to the ranch-farm peninsula of the route, named the Arcanine Farm.

Speak to the ranch-manager, who can be found in the entryway of one of the exterior fencehouses; see the thumbnail to the right for a visual pointer.

He initially seems happy with his current job as a ranch-manager, but soon displays his discontent over it, revealing that he wanted to pursue a career in surfing but was saddled up on the ranch to take charge of his family's ranch. Also wistful to see the rarer Pokémon inhabitants of the nearby safari zone, yet unable to do so himself due to his confinement to his family's ranch, he will ask for you to hunt for and show him three of those Pokémon, yourself: Pinsir, Kangaskhan, and Chansey.

Hunting for the Pokémon

Pinsir, Kangaskhan, and Chansey can be obtained from anywhere at any time, but all of them must be under your OT registry; this removes the option of trading for them, meaning you must be the one to catch them.

You will not have to give the Pokémon to him; you will simply need to show it to him, allowing you to retain whatever you have caught.

This step will be seamless if you have already obtained some or all of the required Pokémon, but it can be rather time-consuming if you choose to hunt for them all. It is advisable to read the Pokémon-specific articles for all obtentionary information for them, but the most viable methods for each Pokémon are explained below.

Pinsir is huntable in nearby Kanto Safari Zone Area 1. Due to its entry fee being

5,000 for a single 20 minute session, it is not cheap to find a Pinsir here. Alternatively, you can purchase the daily pass for

50,000, but it may be too steep of a price for most players at this point. Furthermore, it may seem like a waste if you encounter a Pinsir in the first few attempts. It can also be found inside Safari Exclusive, which requires active Membership to enter. As such, this place should not be the first area you try.

Excluding the Safari Zones, Pinsir is also huntable in these areas at the same rarity: Bug Catching Area, Isolated Forest and Route 229.

Kangaskhan is strictly huntable within the Kanto Safari Zone and Rock Tunnel. As a membership-exclusive spawn in Rock Tunnel 1, the Rock Tunnel cave is considered optimal for active members, as it spares the entry expenses and time-limit constraints of the Safari Zone.

Chansey spawns in several areas and has the same percental probability for most of them, with the majority of its spawn locations sharing the same optimum, probability-wise; see its individual article for more information. To save yourself the fees of entering the Safari Zone, it is advisably to hunt Chansey in Route 13 or Route 14.

Alternatively, you can obtain Happiny and evolve it into Chansey; if you successfully do so, it will still be submissible to the ranch-manager regardless of its evolutionary roots.

Once you have acquired all three Pokémon, return to the ranch-manager. Because he will ask you to show them, you should ensure that you have all-three Pokémon in your current lineup before returning to him.

For showing all three of them, he will reward you an Arcanine Mount, giving you an alternative to the Bicycle or one of the Coin Shop-purchasable Mounts.

The quest is now complete!